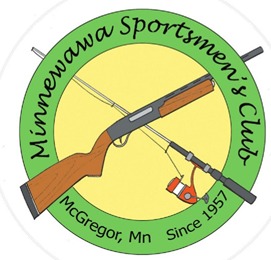 The Minnewawa Sportsmen's Club has been involved with conservation projects including rearing ponds for walleye, stocking Lake Minnewawa with fingerlings, clearing ditches and dredging fishways.
The Club owns a Gun Range (off of Highway 65 South of McGregor). The Range has facilities for ARCHERY, RIFLE, SHOTGUN and HAND GUNS.